In Cambridge, a haven for the young homeless

CAMBRIDGE — The guests began arriving after dark, shouldering frayed backpacks, lugging skateboards or guitars. Some arrived quietly, slipping through the side door of the First Parish church in Harvard Square. Others lingered in the chilly night air, pulling from cigarettes and making small talk.

Eventually, however, they all made their way inside, down a flight of stairs, past a jovial and thorough security guard, and into a basement where the city’s unlikliest social experiment was playing out: a shelter designed for homeless millennials.

Their paths to homelessness — and to the shelter — are varied, though Greenberg says most fall into one of three categories. There are those who fled abusive or neglectful home situations. Others grew up in foster care and transitioned out without the skills or support to make it on their own. And a significant number are members of the LGBTQ community who, finding a lack of family support, elect to leave home altogether.

Get Fast Forward in your inbox:
Forget yesterday’s news. Get what you need today in this early-morning email.

The shelter, which opened in December and will close for the season on April 15, was an idea born of necessity. Aware that younger members of the city’s homeless population were largely relegated to the same facilities as the older homeless — and that such an arrangement posed obvious issues — the two founders set out to create a space solely for young adults.

They envisioned it as a kind of alternative haven — more college dorm room than army barracks. Unlike the sterile confines typical of many adult shelters, the 22-bed facility would have asizeable common area with TVs, computers, and video game consoles. Closets would be packed with free toiletries and donated clothing for guests to pull from as needed. Washers and dryers would allow them to do laundry at their convenience.

It would also be a place where a cadre of volunteers — caseworkers, legal aid workers, medical staff — would be available to help a homeless demographic with a strong chance of getting back on its feet. 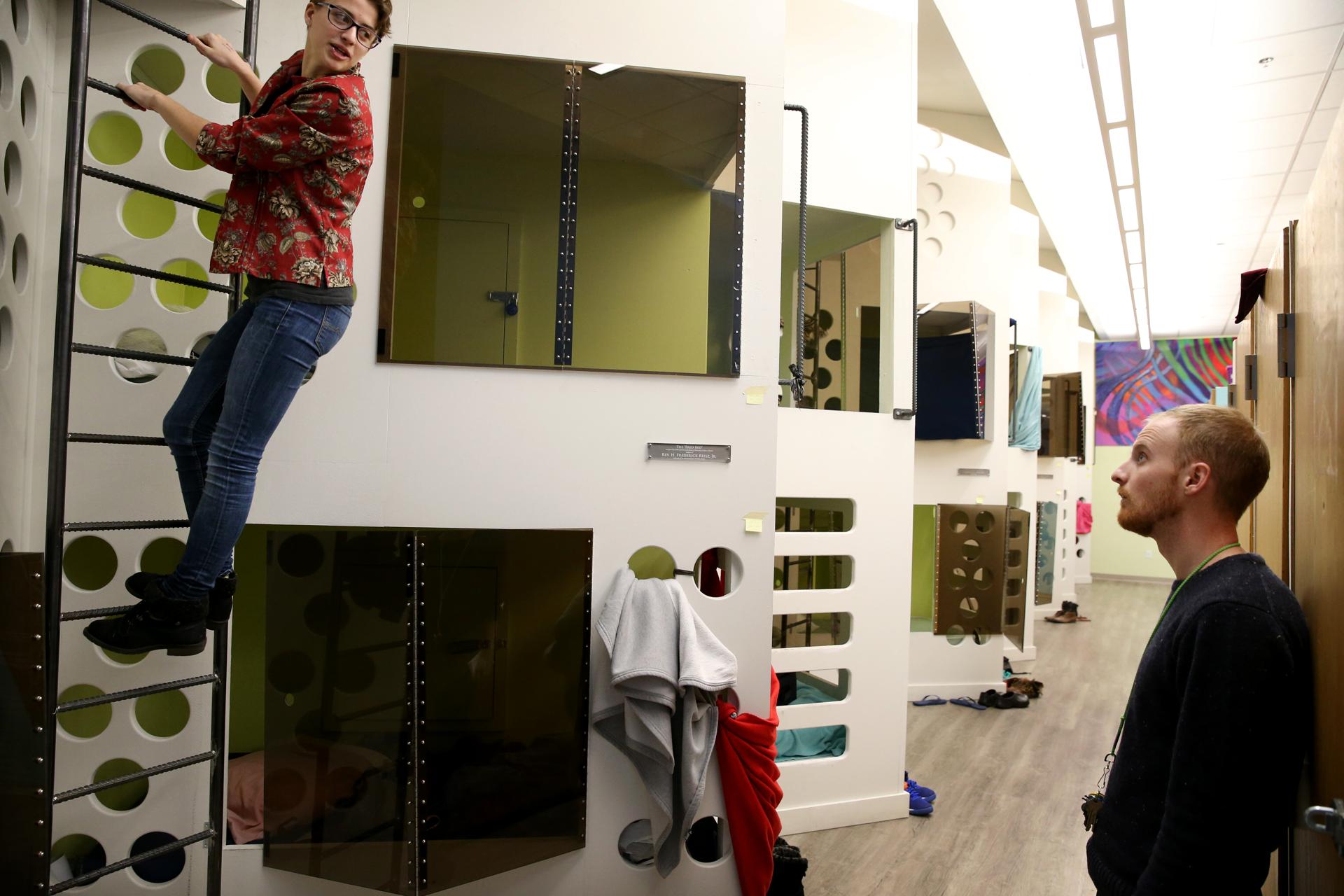 On a recent weeknight, as a collection of guests filed through a security checkpoint and into the sizeable and thoughtfully designed church basement, the earliest stage of that vision was playing out.

Guests lounged on couches or in front of computer screens, chatting casually. Across the room, a cluster of volunteers — made up almost entirely of Harvard University students — worked in the full-service kitchen, serving up grilled cheese sandwiches and plates of chicken and pasta. At the back of the room, three guests quietly watched cartoons, a subtle reminder that most of these individuals had only recently emerged from childhood.

The project was financed by donations from a number of sources, including Harvard’s Phillips Brooks House Association and the Richard and Susan Smith Family Foundation. On a recent evening, some guests took advantage of the resources available — a case manager and legal services volunteer were on-hand to meet with anyone interested — but for the most part, they simply tried to relax.

Many guests knew one another at least peripherally, having crossed paths at other shelters or on the streets. And all seemed to appreciate a place geared solely toward themselves.

“We haven’t been out here (long),” said Keenan Duris, a 19-year-old who spent much of the past year and a half sleeping outside. “We’re not used to being out here.”

In creating the space, Greenberg and Rosenkrantz sought to make things as comfortable — and safe — as possible. The majority of the shelter’s guests are awarded 30-day stays, while a small number are admitted through a nightly lottery that offers any unclaimed beds. Upon arrival, guests are briefed on the rules — no alcohol or drugs allowed on the premises, no public displays of affection, no violence or abusive behavior. Those with known drug problems are admitted so long as they’re sober enough to respect the facility and its guests.

And while shelter staff must occasionally suspend a guest for a rule violation, Greenberg says, most issues that arise are minor offenses — arriving at the shelter past check-in time, for instance — handled with warnings.

Evangeline Durand, a friendly 21-year-old who sat on a couch watching videos on a laptop, is a veteran of multiple local shelters. At one, she said, the workers tried to encourage her to have sex with another guest. One man would approach her and begin touching himself.

Durand, who is transgender and struck out on her own after living with her mother and sisters in a family shelter, said her biggest complaint about Y2Y was that she occasionally arrived at night to find other people’s belongings on her bed.

“Safety is my biggest issue,” she said. “And that should be everybody’s first concern.”

By 11 p.m., the lights were mostly out and many of the guests had retired to their sleeping nooks. The handful that remained awake, watching videos or poking around on the Internet, slowly thinned out until the only people left awake were the small handful of volunteers charged with keeping an eye on things.

And this is how it continued, until 6 a.m., when the long silence was pierced with angry screaming.

A guest — having apparently woken to find his watch missing — jumped from his bed and demanded, with no shortage of profanity, that the shelter’s other guests get up as well. Others rustled awake, confused or annoyed, and those who urged him to keep it down were met with obscenity-laced responses.

The rant lasted around 30 minutes, until eventually, the watch was found on a nearby couch. The young man apologized, and a shelter supervisor handed him a minor warning.

“One of our bumpier mornings,” acknowledged Jason Gomez, a Harvard senior serving as a volunteer overnight supervisor, after the situation had been defused.

The unnerving wake-up call notwithstanding, members of the staff described it as a fairly typical night at the shelter. Eventually, guests rose and went about their mornings, making their way toward the showers or over to the kitchen, where a spread of cereal and fruit had been laid out.

Duris, who sat eating pancakes at one of the communal tables, chatted idly about the day ahead. Likely, he would be panhandling — downtown Boston, he knew, typically yielded larger bills, though Harvard Square was usually more consistent money — but he was thankful that he wouldn’t have to worry about where he’d be sleeping.

“No matter what you’re doing during the day,” he said, working on his breakfast, “you always have that thought in the back of your mind: Where am I going to sleep tonight?”

As the shelter’s 8 a.m. checkout approached, staff members offered gentle reminders, and the guests — aware that a late departure would result in a warning — rose slowly from their seats, gathered their belongings, and shuffled toward the exit, some stopping to grab extra food on the way.

Soon, the last few had exited onto Church Street and back into the chilly morning air, unsure what the daywould hold, but with the knowledge that they’d have a place to return at the end of it. 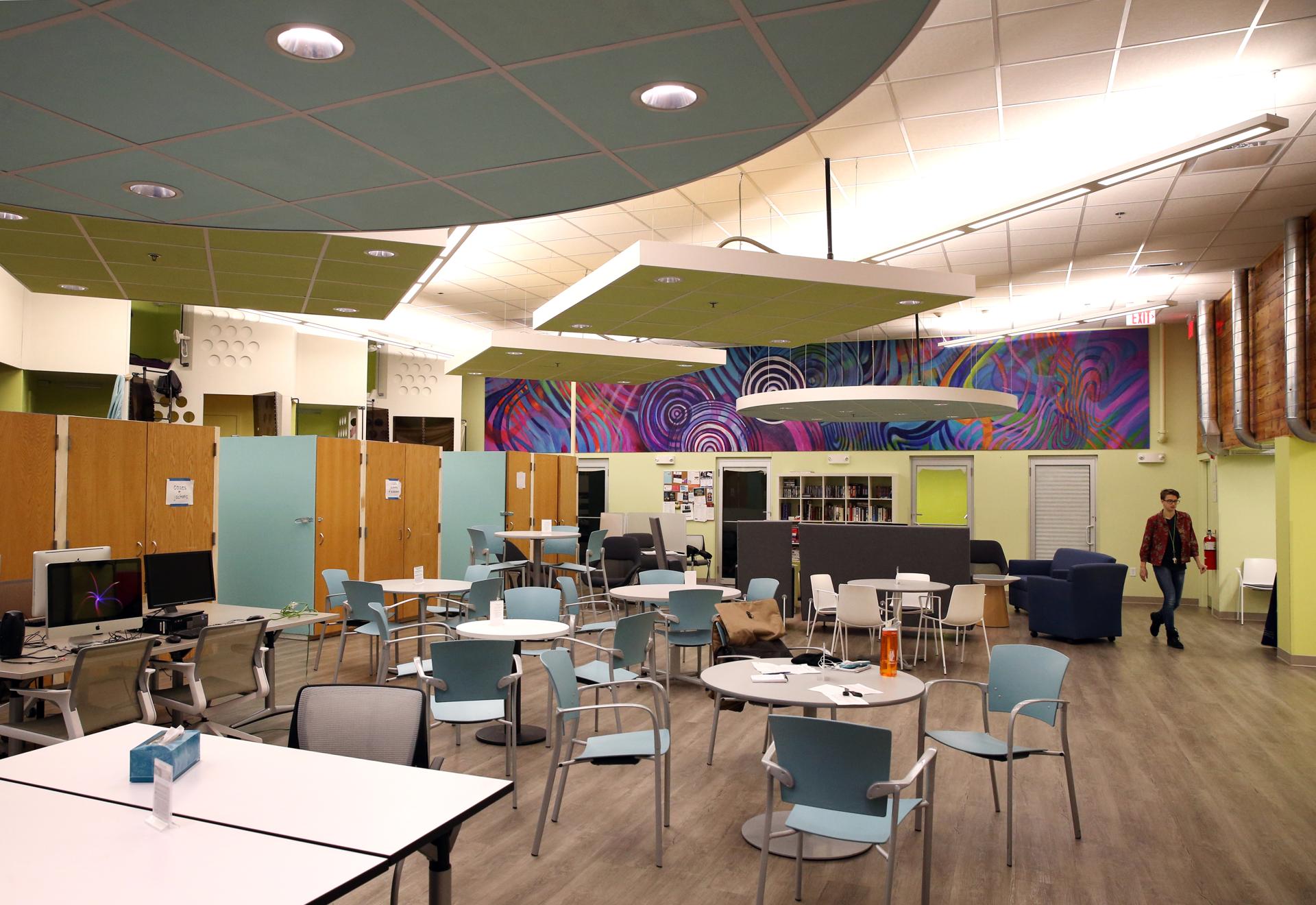